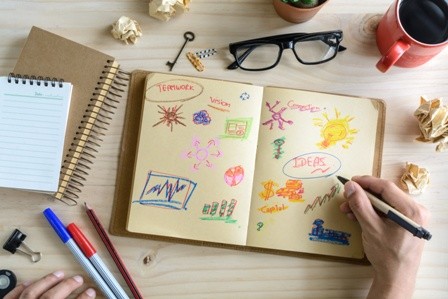 A lot of big companies run low on innovation despite the fact that it’s talked about at every staff meeting and CEO presentation. Why is innovation so difficult to foster in large corporations and how can that benefit you as an entrepreneur?

So why innovate? Well without innovation companies are not able to bring about a step-change and dramatically increase sales and open new markets. Innovation is the difference between life and death in today’s technologically driven society.

Innovate or Be Eaten

The fact of the matter is that most big companies battle to innovate, despite having massive departments full of capable staff and seemingly limitless resources to throw at problems and ideas.

A few examples of companies that missed the innovation curve and nearly got left on the way:

Why is it so Hard to Innovate?

I’ve worked for companies where innovation was the buzzword used at every meeting; we had ideas forums and innovation was one of the KPI’s we were measured against, and yet innovation was rarely seen on the shop floor. What is this mystical thing and why is it so hard to encourage it?

It’s simple really. At the heart of every business is fear of change, and this fear comes from its employees. Change leads to disruption and disruption causes pain. Innovation makes some people look bad, like they’re not doing their job. It makes certain jobs redundant, perhaps even entire divisions.

Corporations are big, slow beasts and it can be impossible to one or two individuals who are ideas people to change the course of the business, especially if it’s not embraced at a senior (and I’m talking CEO here) level. If the big boss gets behind the idea, it could work, if not, it will never see the light of day.

How Entrepreneurs can Benefit from This

So what now? The world is going to be a pretty sad place without innovation. How can we as entreprenerus benefit from the fact that corporates are big and slow?

Enter tech startups. Tech startups are effectively external research and development (R&D) for big corporates who have the brains to see them as that.

Tech startups are nimble, flexible and lightening quick. They are able to see a gap and build it sometimes within the space of a few weeks. They are usually closer to the market’s needs and up-to-speed with trends, not from having read about them, but from having been a part of them.

Tech startups are disruptive game changers, and corporates who aren’t able to innovate are snapping the good ones up at a rate of knots. Just look at Yahoo who recently acquired Tumblr, Flickr and a host of smaller services in a bid to augment their product offering and grow market share.

So how can you be acquired by a corporate?

Don’t build the solution and then go find the problem. It helps that you know the market or have experience that you can build on

It always helps if you’ve got millions of users, profitability is less important than the fact that you are the preferred app for whichever niche market

Build it first for mobile devices, and then for PC’s

Don’t build something for a tiny niche that nobody has managed to make a profit off of yet, go for larger markets that are potentially or can scale into global

Hopefully some of the big dogs will notice you once you’ve done all of the above and you’ll get a call from Google offering you a few hundred million…dollars! If that happens, spare me a thought?

Contact Shift ONE for advice on all your digital and online marketing requirements.