Confessions of a Grammar Nazi

It was the perfect Saturday morning. The sun was shining. Pigeons were practicing extreme water sports in the birdbath outside. A cacophony of yapping neighbourhood dogs and bratty toddlers filled the polluted suburban air. And I had made it through my first cup of coffee without yelling at the dog. I sighed in contentment. It was going to be a good day.

Humming a jolly tune, I absentmindedly scanned the stream of dull life events that made up my Facebook newsfeed, when my eye caught an obnoxious little phrase that threatened to start World War III in my own living room…

“Justin Bieber is SO much cooler then One Direction! LOOOOOL!”

Believe it or not, it wasn’t the downright absurdity of that statement that got my blood boiling. It wasn’t even the fact that “LOOOOOL!” in expanded form is, in fact, “Laugh Out Out Out Out Out Loud!”, automatically reducing the speaker to nothing more than an excitable seal. What got my knickers in a twist was the act of blatant injustice inflicted upon an innocent little word caught in the wrong place at the wrong time:

I froze. My left eye and the corner of my mouth began to twitch in perfect unison. I think I may have even begun to froth at the mouth. If I had been a cartoon character, I’m pretty sure I would have had jets of steam gushing from my ears and nose, accompanied by a face as red as a sunburned lobster.

In that moment, I’m not sure if the maniacal laughter that accompanied my nervous breakdown was the result of the horrendous grammatical offence displayed on my screen, or if it was simply a preferable alternative to lying in the corner in the foetal position, humming a Justin Bieber tune while sucking my thumb.

What I do know is that it took every ounce of self-control that I could muster to prevent me from lunging at my computer screen in an attempt to facepalm the offender squarely between the eyes. “Next time…” I whispered my revenge whilst stroking my mental collection of fluffy full stops and cuddly commas.

Now, contrary to what the aforementioned scenario may suggest about my mental health, I consider myself to be a pretty chilled individual. I could happily wish the average Capetonian taxi-driver the very best in his future endeavours with a Colgate smile as he cuts in front of me without indicating in peak-hour traffic.

I could even handle your average supermarket cashier’s disinterested “you wanna bag?” request without short-circuiting.

But if there was ever a reason for me to consider punching someone in the face with a chair and not feel bad, it would be this: poor grammar.

The life of a Grammar-Nazi is a lonely one. It’s dark and gloomy and full of apostrophes. “At least they’re in the correct places”, my Nazi-conscience reassures me. As comforting as that may be, I can’t shake the feeling that champions of the correctly-placed apostrophe have been placed into a social category similar to that of lepers.

Now, before you think of a whole host of unkind labels to throw my way, just make sure they are spelled correctly, and hear me out. Good grammar these days is about as rare as a steak that “moo’s”. That’s a pretty big deal for me.

One look at your average person’s Facebook page is enough to indicate that we are surrounded by people who wouldn’t know proper grammar even if it donned a leopard-print thong and sang karaoke.

Oh, for the love of pink unicorns…

Can somebody PLEASE hand this kid a book – preferably something devoid of any “likes”, “duhs”, FMLs” and other horrendous abominations of the English language. My kingdom for a perfectly structured sentence! Is the written word doomed to be reduced to a couple of LOLs and ROFLs?

When I was little, my mother forced me to march on the kitchen table while I practiced my spelling. Some call it extreme. I call it innovative. Either way, I now know the difference between “to”, “too” and “two”, “their”, “there” and “they’re”, and my personal favourite: “than” and “then”.

I may just be speculating here, but a kid that chooses to devour a classic novel over drooling semi-consciously in front of a television may just secure themselves a head start in life. At the very least, the likelihood of them sounding like an excitable seal is greatly reduced.

So…yes. I’m a self-confessed Grammar Nazi. Hey, we all have our issues. Some fight for a chicken’s right to cross the road. Others champion the emancipation of vegetables. I fight for good grammar. A comma cause. (See what I did there?). I commit myself to the deliverance of the displaced apostrophe, justice for the jaded comma, and the integrity of the tenses! I dream of a world where a question mark is never questioned, a full stop never stopped…

Yes, the life of a Grammar Nazi is a lonely one. It’s dark and gloomy and full of apostrophes…

Um…my dog is looking at me oddly, so I’m just going to lose the Lady Liberty pose and climb down off the table now. 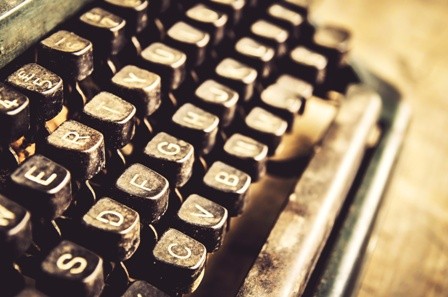 Kelly is the latest addition to the Shift ONE team, and has brought a new level of excellence along with her.

Her incomparable copywriting skills and project management abilities help her bring another level of creativity to the Shift ONE team.